After downloading the Analytica installer from https://www.lumina.com/, double-click the installer to start installation. It installs onto your hard drive the executable software, plus a range of Analytica libraries and example models. If you have installed an earlier release of Analytica, the installer provides you the option to leave it there, so you can run either version.

We recommend that you run the Analytica installer from the account where you will eventually be using Analytica, rather than changing to an administrator account first. However, if you change to an admin account first, or if you have an IT administrator install it for you, then you (or they) should not enter your activation key into the installer (just leave the field blank), since you want the license to be activated for your user account, not your administrator’s account. When the activation key is not provided during the install, you will be asked to enter it the first time you launch Analytica.

The setup program asks you to confirm the directory name in which to install Analytica, by default, C:\Program Files\Lumina\Analytica 6.2. Most users can accept the default. If you do not have sufficient permissions to write to this directory, then you may want to use [My Documents]\Lumina\Analytica 6.2.

Licenses: You need a license to use the software. The Analytica_free license is automatically included with the downloaded software, and may be used by anyone. Two types of Analytica licenses may be purchased: individual and centrally-managed. Individual licenses are installed directly on your computer, while centrally-managed licenses (which includes floating and site licenses) are hosted by a Reprise License Manager (RLM) server. 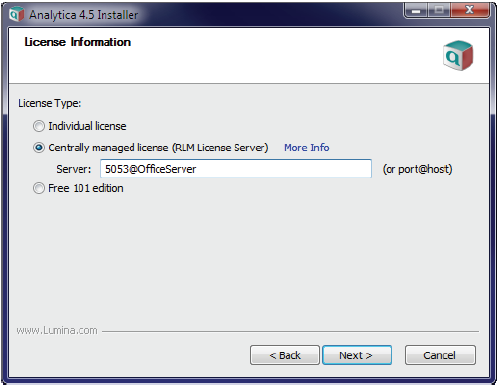 Individual licenses: When you purchase an individual license, Lumina emails you an activation key. You may enter the activation key either during installation or after installation from the Update License... dialog on the Analytica Help menu. When you activate a key, a license file for your computer and user account is downloaded from the Lumina’s internet-based activation server and placed on your computer. If you are using a computer without direct access to the web, an activation key can be manually activated at http://lumina.com/ana/manualActivation.htm. With manual activation, the license file is emailed to you and you must save it into the Analytica install directory, and then select the license in the Update License... dialog.

Centrally-managed licenses: If your organization has installed a centrally-managed license on an RLM server, such as a floating license, you will need to know the name of the RLM server computer and possibly the port number (if your IT manager has configured a non-default port number). During installation or after installation from the Update License... dialog on the Analytica Help menu, select the option to use a centrally-managed license and enter the server name (and port if required). If multiple licenses (e.g., for different editions) are available, you will also have the opportunity to select which license to use.

Analytica docs: These Analytics docs online are essential for those learning and using Analytica. Anyone can read them via a we browser. But, the docs are a wiki (using the Mediawiki platform like Wikipedia) . So, if you log in, you can edit and add materials, which we encourage you to do. While installing Analytica, you can supply your end-user information (name, email) to set up a Wiki account if you have a paid Analytica license. When the account is set up, it emails you login information and password.

Expiration dates: Some licenses — notably, for a Trial or an edition licensed per year — expire after a certain time. After expiration, they revert to become the Free Edition. So you can still open, view, and run your models. And you can still edit models with fewer than 101 user objects. To reactivate the previous edition of Analytica after expiration, you may need to purchase a copy or renew your subscription.

When you purchase a license or upgrade to another edition: You don’t need to download and reinstall Analytica when you purchase a license after using the Free Edition (or any other edition). Just select Update License... from the Help menu in Analytica and enter your new activation key into the Licensing Information dialog. It will automatically upgrade to the new edition. 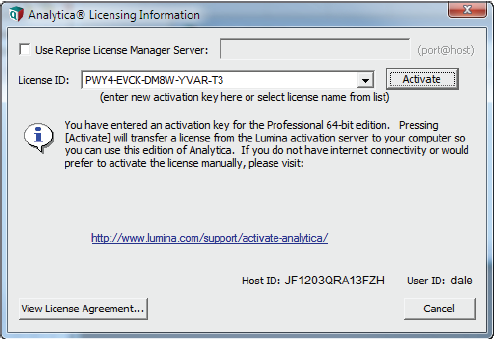 Tip
Analytica Decision Engine (ADE) is a different application from Analytica, and requires a new installation, even if you already have another edition of Analytica installed.

To upgrade to a patch release: When you upgrade a licensed copy with a patch release (e.g., 4.5.1 to 4.5.2), simply run the installer. The fields you entered originally will be filled in, which you can leave unless you wish to make changes. You do not need to re-enter an activation key that has been previously activated, and can leave that field blank. The installer replaces the older release and reuses your existing license.

Hardware and software requirementsInstallation and licensesEditions of Analytica
Categories:
Comments