Analytica User GuideCreate and edit a modelDraw arrows between modules

There are four methods to draw arrows between nodes in different modules. Suppose you want to draw an arrow from the variable Buying price to the variable Mortgage loan amount in another module. 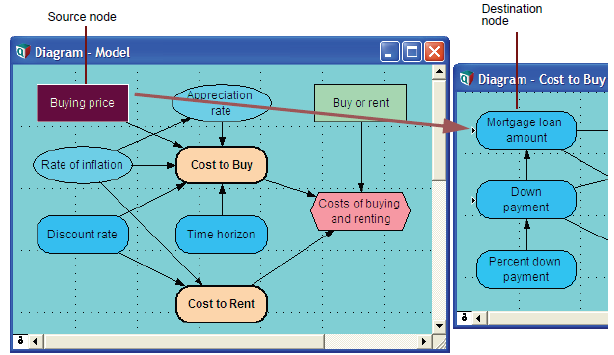 Draw arrow across windows: The most direct method works when you can arrange the diagrams so that both the origin and destination nodes are visible on screen at the same time:

Move nodes to same diagram to link them: A second method is to move one of the nodes into the diagram containing the other. Then you simply draw an arrow between them in the usual way. Finally, you move the node back to the diagram it came from. This is convenient if you have large diagrams and a small screen so that its hard to arrange the two diagrams so that both nodes are visible at the same time.