Creating or editing a definition

How to create or edit a definition

To create or edit the definition of a variable (or function), first be sure that the edit tool

is selected. Select the variable of interest by clicking its node in its parent Diagram. Then do one of these actions:

Each of these three actions either

If you want to make sure to edit the Definition in the Attribute panel:

If you want to make sure to edit the Definition in the Object window: 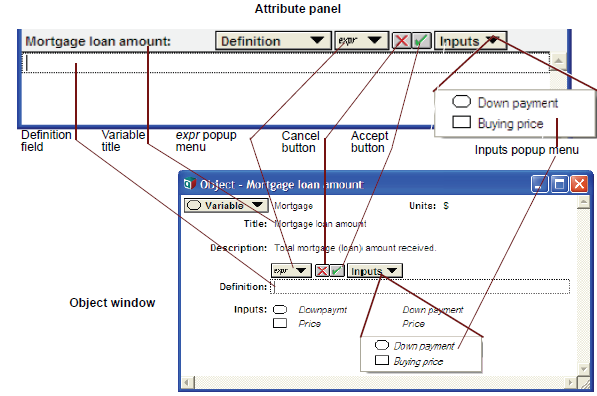 If you have drawn arrows into this variable from other variables (Down_payment and Buying_price in this example), they appear in the

menu. Select an input to paste its identifier into the definition. (The menu doesn’t appear if the variable has no inputs.)

Tip
If you are editing a Definition in the Attribute panel, you can insert the identifier of a node into the definition at the cursor simply by clicking that node while pressing the Control or Alt key. This only works for nodes in the same diagram.

To edit a definition that is a simple number, text, or other expression:

See Expressions for the syntax of numbers, operators, simple expressions, and mathematical functions.

You can change the definition to one of several common expressions by selecting an option from the Expression popup menu.

Expression Assist: As you type an expression into the definition, the Expression Assist pops up with each keystroke to show possible identifier completions, function parameters, function descriptions, or index values. Expression Assist may be turned on or off from the Preferences dialog. Even when it is turned off, you can press Ctrl+Space to display it temporarily.

Shortcuts for editing': These special mouse and key combinations are useful when editing a definitions:

If you press Shift with any arrow movements, it selects the text between old and new cursor positions for copy/paste operations, etc.

Parenthesis matching: Analytica expressions sometimes contain several levels of nested parentheses. To help keep parentheses clear, when you place the cursor just to the right of a parenthesis, it makes it and its matching parenthesis bold. This works for left or right parentheses, square brackets, or curly brackets (used for comments). It helps you see whether you have the right number and types of parentheses in complex expressions, without resorting to counting.

Comments in definitions: It is wise to document your models generously. Usually, it’s best to document what a variable or function represents in its Description attribute, and also explain its algorithm if it’s not obvious. For complex, multiline definitions, it’s also useful to insert comments within the definition. Comments can also be used to disable portions of expressions while debugging.

You can insert a comment at any point in an expression where whitespace is allowed. Analytica ignores anything inside a comment when parsing or evaluating an expression. If you start a comment with { , then your comment cannot contain the } character within the comment.

Tip
Analytica does not preserve comments in the cells of an edit table — so it’s not worth entering comments there.

Identifiers: To refer to the value of another variable, use its identifier. To place a variable’s identifier at the insertion point in the definition, do any of the following:

Functions: You can paste functions at the insertion point by doing either of the following:

Syntax check: After entering or editing a definition, press Alt-Enter or click the accept button

to perform a syntax check of the revised definition and accept the changes.

to cancel your changes.

appears next to the definition if it is not syntactically correct. Click the icon to see a message about what might be wrong.

A definition’s syntax check can reveal syntax errors. For example, if a definition contains text that is not an identifier, the following dialog appears.

After you give a variable a valid definition, the influence diagram containing that variable might change.

Cross-hatching disappears: Normally, any node whose definition is missing or invalid displays with a cross-hatch pattern.

After you enter a valid definition, the cross-hatching disappears and the node becomes clear.

You can remove cross-hatching even from invalid variables by unchecking Show Undefined in the Preferences dialog from the Edit menu.