An alias is a copy of a node, referring to the same variable, module, or other object as the original node. It’s often useful to display an alias node in a different module than its original node. For example, if module M1 contains variable X, and X has outputs in another module M2, it’s often useful to add an alias of X in M2 to display the influence of X on its outputs explicitly. This makes it easy to draw arrows from X to or from other variables in M2.

A variable or other object can have only one original node, but an unlimited number of alias nodes.

Tip
An alias node is identified by its title being shown in italics.

You can create an alias directly with the Make alias command, or indirectly by drawing an arrow to or from a module node. These methods are described below.

It displays an arrow between the nodes.

Open up the module Cost to Buy to see the new alias. 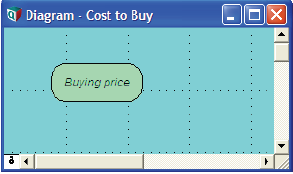 Draw arrow between two modules: Draw an arrow from one module node Cost to Buy to another module Total Cost.

This creates a new variable node with a default name, such as Va1, in the first module Cost to Buy, with an alias of Va1 in the second module Total Cost. 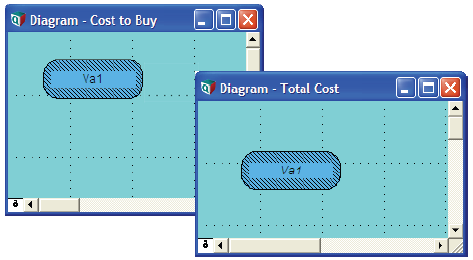 An alias is like its original: An alias looks and behaves like its original node, except the fact that its label is in italics. You can select it, double-click it to open it Object window, move, resize, edit its label, and draw arrows to or from it, just like any other node. The alias and original show the same title — if you edit the title in one of them, it automatically changes in the other.

How alias and original can differ: On the other hand, the properties of the node — rather than the object that it depicts — can differ between the original and its alias. You can modify one node’s location (obviously) and size, its color (using the Tutorial: Color palette), and its styles using the Node Style dialog.