You can greatly improve the clarity of a large model by the way you organize it into a hierarchy of nested modules.

When assigning nodes to diagrams, the goal is to put groups of nodes that have many links among them in the same diagram, and to separate them from other groups with which they have few or no links. For example, the diagram below shows that a group of nodes related to annual housing costs have been organized into the Annual costs module within the larger model. 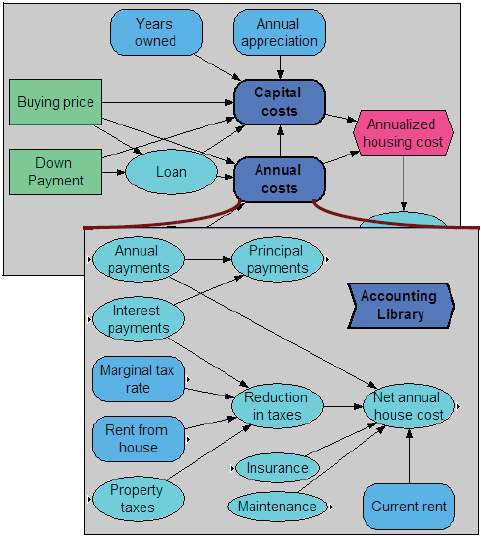 Sometimes you have a good idea of how to group nodes before you create them. In such cases, it is easy to create the modules first, and then create and link the nodes in groups in each module.

In other cases, it might not be obvious which groupings work best. It is then often best to create all the nodes in a single large diagram. After drawing all the arrows, you might have a confusing spaghetti diagram. At this point, try to move the nodes around to identify groups containing 5 to 15 nodes, with many links within each group and fewer links between groups. When you arrive at a satisfactory grouping, create a module node for each group and move the group of variables into its own module.

Experienced modelers have found that a range of 10 to 20 nodes per diagram works best. There may be a good reason for occasional modules with fewer or more nodes.