It is best practice in Analytica to keep different editable user inputs and computed results in different variables. But, it is often convenient to define part of a user interface that combines editable and computed values, which the MultiTable lets you do.

For example, suppose Startup_cost and Prob_success are both edit tables, indexed by Project. Then the a variable defined as:

MultiTable is the inverse of SubTable in that it combines multiple sources into one view, where SubTable selects a particular slice or subset of data to edit.

Before you create a MultiTable, you need to create or identify one or more indexes that your data sources will vary over. For example, if you want a different data source to appear in each column of your table, then you'll need a column index, and you'll need to fill in the labels for each column as you define the index.

Next, create a variable to hold your MultiTable and press Ctrl+E to place your cursor in the definition field.

In the Object Finder, select the Array library and scroll down to find and select MultiTable. Then, press the Indexes button.

The table initially displays the "Meta expressions" view so that you can specify the data sources for the table. The meta-expression selector controls which view you are in.

Here is an example of meta-expressions.

In the above meta-expressions view, Option_type, Stock_symbol, Strike_price and Expiration_date are identifiers of other edit tables. These will be editable columns. Stock_price_lookup(Stock_Symbol) is a call to a User-Defined Function, and its computed value will appear in this column. The last cell contains Mid(Contract_valuation), so that the computed mid-value of Contract_valuation will be displayed. When you want the computed value of a variable, you must surround its identifier with Mid in this fashion, otherwise its definition will appear in the cell and will be editable.

The source can be a scalar variable, an edit table, a SubTable or another MultiTable. Rather arbitrary transformations that be accomplished by nesting SubTables and MultiTables.

The following are computed expressions, which are evaluated and the resulting value displayed in a non-editable form with a gray background.

Here are a few additional examples:

A computed expression or computed variable CAN depend on the values of other data sources that appear in the same MultiTable. When you do this, the computed value will change when the user changes the input cells and presses the green check button.

When cells can be edited

You can never edit computed values in a MultiTable

Here is an example of an editable value and computed value in the same table: 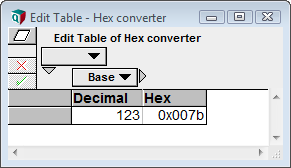 The first cell can be edited, and when you change it and press the green check, the hexadecimal value is computed and displayed.

A MultiTable works best when your sources all have the same dimensionality. When one source does not have an index present in another source, a single cell in the source will map to multiple cells in the MultiTable; hence, you'll see the same value multiple places, and when you change it, multiple cells will change. The source retains its original dimensionality, so if the value doesn't vary along an index in the source, it won't vary along that index is the MultiTable. You may temporarily see a difference in these cells after you first enter a value, but they will become consistent as soon as you press the Green check.

When number formats are set for the source tables, those formats are used in the corresponding column of the MultiTable.

When a meta-expression is of the form Mid(X), then X's number format is used. For arbitrary expressions, the number format of the MultiTable's own variable is used.

A SubTable and MultiTable are very closely related. Each presents a table view of data that is located in one or more different sources. In each case, the table view can contain a mixture of editable and computed cells. They can even be nested in any combination -- i.e., each source a MultiTable can be another MultiTable or another SubTable (in which cases, the real location of the data is two (or more) steps away). There are cases where you can obtain the same table view using either a SubTable or a MultiTable. There are also cases where only one of the two will get you to your desired view (in these cases, it is usually theoretically possible to do it with either, but the wrong choice is excessively complex and inflexible). This brings up the question -- how do you figure out which one you need to use?

The following example illustrates this idea (download this example model). You have two source tables, each indexed by Move_num:

In the first variation, you want to combine these into an editable move table as follows:

In this variation, the index Side indexes the source tables, so therefore, MultiTable is the correct option.

In the second variation, you want to combine these into a linear move sequence as follows:

This maps the sources to a new index

In this case, the index, Turn indirectly indexes the source, but it doesn't directly index the sources. While it is possible to use a MultiTable with the index Turn, you would need to insert a separate expression in all 10 cells. If, in the future, you change the maximum number of moves, if take some work to get the new cells to automatically start with the correct cell default. So for this variation, a SubTable is a much better option than a MultiTable. One way to define the SubTable is as