The evaluation of some models may require large amounts of memory, especially when they contain arrays with high dimensionality. When the memory needed by your model approaches the available memory on your computer, you may encounter an error informing you that there is insufficient memory to carry out the computation, or you may experience a general slowdown as the process starts utilizing virtual memory. To address the challenges presented by memory bottlenecks, you may need to rethink various aspects of how you are attacking your problem, or you may have to employ various advanced modeling techniques to obtain the desired computations.

When you evaluate a model that requires more memory than your computer can provide, your experience is likely to be different depending on whether you are running the 32-bit or 64-bit edition of Analytica. Analytica 32-bit, like any 32-bit process[1], is limited to a maximum memory usage of 2GB, 3GB or 4GB, depending on the operating system. When this limit is reached, Analytica will report an insufficient memory error. With the 64-bit edition, which does not have this same limit[2], you are more likely to encounter a slowdown when the model’s memory requirements substantially exceeds the amount of RAM on your computer. The model continues to evaluate, but the computer is slowed as it swaps pages of memory between a page file on your hard drive and RAM.

Various settings in the Windows operating system determine the maximum amount of memory that your process can use before running out of memory.

In 32-bit editions of Windows, processes are limited to 2GB of space unless you explicitly configure a flag in the C:\boot.ini file. With the /3GB flag in boot.ini, processes like Analytica may use up to 3GB (see How To Access More Memory on the Analytica Wiki). Analytica 32-bit may be used from a 64-bit edition of Windows, in which case it can utilize 4GB with no special configuration required.

If you need to utilize more memory than the amount of RAM on your computer, you may need to adjust your virtual memory settings. On Windows, configure this from My Computer → Properties → Advanced system settings → Performance → Settings → Advanced → Virtual Memory (Change). You can substantially improve performance by installing a solid state hard drive (SSDI) and locating your page file on that drive. You should configure a custom size with an initial size that is large enough to accommodate your large computations. We find that Windows freezes for several minutes when it needs to increase the size of its page file, which you avoid by using a suitably large initial size. 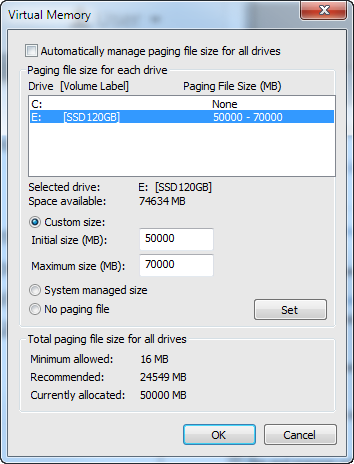 The above virtual memory settings illustrates our recommended settings. On this computer, the paging file has been located on the solid state drive E: for maximum speed. To ensure it uses the SSDI, drive C: is set to No paging file. A Custom size for E: has been specified -- this part is important. We strongly recommend against using the System managed size option (unless you enjoy having Windows freeze for several minutes). Set the initial size to something large enough to accommodate the largest memory usage you might ever encounter. In this example, the maximum size has been set to something a bit larger, but in reality there is little benefit to setting the Maximum size to anything larger than the Initial size, since you should never exceed the initial size.

You can monitor the total amount of memory in use by your Analytica process by using the Memory Usage dialog. See also Memory usage.

When you find your model consuming excessive amounts of memory, the first step is to determine where it is using that memory, and track it to a particular variable. For that, the Performance Profiler library is especially useful. This is a feature available in Analytica Enterprise, and with it, you can determine how much memory is being consumed by each variable in your model. It is not uncommon to find that a small handful of variables consume the bulk of memory, and knowing that, you can focus your efforts on those variables.

Excessive memory usage is most often the result of excessive dimensionality. Analytica makes it very easy to add indexes to your model, but the effect is multiplicative in space and time when those indexes appear in the same array. Finding the right trade-off between dimensionality, level of detail and resource usage (time and computation) is an inherent aspect of model building.

When reducing dimensionality, focus on individual arrays that consume a lot of space as a result of high dimensionality. Can you reformulate your problem using a lower-dimensional array?

Whenever Analytica computes the result of a variable, it stores the result in memory. If the value is requested later by another variable, or if the user views the result, Analytica simply returns the previously computed result without having to recompute it again. This is referred to as caching.

It may be unnecessary to cache many of the intermediate variables within your model, or to keep the cached value once all the children of that variable have been computed. You can configure how cached results are retained by setting the CachingMethod attribute for each variable[3]. You can configure a variable to always cache its results, never cache, never cache array values, or release cached results after all children are fully computed. To control the CachingMethod, you must first make the attribute visible as described in Managing attributes. Note that you should always cache results for any variable containing a random or distribution function. There are some other limitations and interactions to be aware of when managing caching policies, as described further in Controlling When Result Values Are Cached on the Analytica Wiki.

Looping over the model

Analytica’s array abstraction computes the entire model in one pass. Because all intermediate variables are normally cached, this means that the results for all scenarios, across all indexes, are stored in memory for all variables.

The basic technique is illustrated by the following example. Suppose your model has an input X indexed by I, and an output Y. We also assume that no intermediate steps in the model operate over the index I. Then Y by looping using:

This simple example is illustrative. As you apply this to complex models involving multiple inputs, outputs and looping dimensions, a greater level of sophistication becomes necessary. The article Looping over a model on the Analytica Wiki covers this topic in greater detail.

In some cases, the CompressMemoryUsedBy() function is able to reduce the amount of memory consumed by array A. The logical contents of A remains unchanged, so you will not see a difference, other than possibly a drop in memory usage.