A tornado diagram is a common tool used to depict the sensitivity of a result to changes in selected variables. It shows the effect on the output of varying each input variable at a time, keeping all the other input variables at their initial (nominal) values. Typically, you choose a “low” and a “high” value for each input. The result is then displayed as a special type of bar graph, with bars for each input variable displaying the variation from the nominal value. It is standard practice to plot the bars horizontally, sorted so that the widest bar is placed at the top. When drawn in this fashion, the diagram takes on the appearance of a tornado, hence its name. The figure below shows a typical tornado diagram. 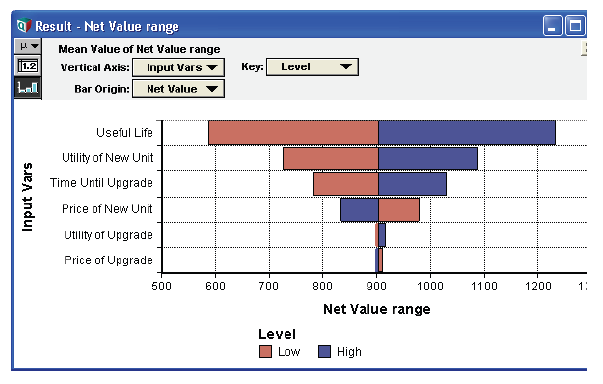 There are several options for selecting low and high values, including:

For this example, assume we vary all inputs by the same amount.

The WhatIfAll function typically provides the easiest method for implementing a tornado analysis in Analytica. Note that the third parameter to WhatIfAll controls the method by which inputs are varied for the analysis. For example:

It’s customary to graph a tornado with the names of the input variables are listed down the vertical axis, and the bars displaying the effect on the output horizontally: