Regression uses least-squares estimation, meaning that it minimizes the sum of squares of the residuals (estimation error) -- the difference between actual and estimated values:

The form of a linear regression model is

If you don't want to include a constant term in your basis, Regression() will return the bias as a second return value, provided that your expression captures the second return value. For example, you can fit a single variable [math]\displaystyle{ y = m*x+b }[/math] model using simply

The function knows whether the second return value is captured or not. When it isn't, the model must pass through the origin and the value for m will be different. When your independent variables x are already indexed by K and you don't want to map these to a new index having one additional element for the constant basis term, it may be more convenient to capture the bias separately, for example:

In this case, c is indexed by K, and bias is scalar. When you want to use this pattern, but you want c and bias to be global variables, a pattern that works nicely is

This captures the bias is variable bias, but passes the first return value through as the result for c.

The Regression function computes the coefficients for the best-fit curve, but it does not compute secondary statistics such as parameter covariances, R-value correlation, or goodness-of-fit.

In what follows, we'll assume that Variable C is the computed regression coefficients, e.g.

For each data point, the predicted expected value (from the regression) is given by Sum(C*B, K).

However, this prediction provides only the expected value. The RegressionDist function may be used to obtain a distribution over C, and hence a probabilistic estimate of «Y».

The R-squared value, also called the percentage of variance explained by the model, is given by:

If your basis «B» might contain NaN or INF values, the corresponding coefficient in C will generally be zero. However, because 0*NaN and 0*INF are indeterminate, the expression Sum(C*B, K) will return NaN in those cases. To avoid this, use the following expression instead:

Alternatively, S may be estimated as†

Estimating S in either of these ways assumes that the noise level is the same for each data point.

In a generalized linear regression, the goodness of fit, or merit, is often characterized using a Chi-squared statistic, computed as:

The S used in this metric must be obtained or estimated separately from the data used to computed the Chi-squared statistic. The resulting metric is a single number that follows a Chi-Squared distribution with IndexLength(I)-IndexLength(K) degrees of freedom† under the assumption that the underlying data was generated from a linear model of your basis with normally distributed noise with a standard deviation of S. S is allowed to vary with I, although in most cases it does not.

Denoting the above as chi2, The probability that the data fit as poor as this would occur by chance is given as†:

This metric can be conveniently obtained using the RegressionFitProb function.

Another set of secondary statistics are the covariances of the fitted parameters. The covariance is an estimate of the amount of uncertainty in the parameter estimate given the available data. As the number of data points increases (for a given basis), the variances and covariances tend to decrease. To compute the covariances, a copy of Index «K» is required (since the covariance matrix is square in «K»); hence, you need to create a new index node defined as:

The co-variances are then computed as:

The diagonal elements of this matrix give the variance in each parameter. Since there is only a finite number of samples, the parameter estimate may be off a bit due to random chance, even if the linear model assumption is correct; this variance indicates how much error exists from random chance at the given data set size.

With S and CV_C (the covariance of parameters C), a distribution on the expected value of «Y» can be obtained for a given input X (indexded by «I»), using:

The RegressionDist returns the uncertain coefficients directly, and is the more convenient function to use when you wish to estimate the uncertainty in your predicted value.

The Regression function is highly robust to the presence of redundant basis terms. For example, if one of the basis functions is a linear combination of a subset of other basis functions, the coefficients are not unique determined. For many other implementations of the Regression function (e.g., in other products), this can lead to numeric instabilities, with very large coefficients and losses of precision from numeric round-off. Analytica uses an SVD-based method for Regression which is extremely robust to these effects, and guarantees good results even when basis terms are redundant.

Weighted regression assigns a non-negative weight to each data point. The weight, «w», therefore is indexed by «I». You may assign a weight of zero to points that you don't want to contribute at all to the result.

One way to interpret these weights is to indicate the relative informativeness of each point -- or inversely the level of noise -- when that varies across the data points. Suppose each point comes from a linear model with noise with distribution Normal(0, s/w_i), where the mean is zero, s is an unknown global noise level, and w_i is the noise for the ith data point. Compare this to a non-weighted regression, where all points have the same amount of noise, according to Normal(0, s). A point with weight 0 has infinite standard deviation, and thus no usable information.

The coefficients for a weighted regression are given by

where «Y», «B», «I», and «K» are the customary parameters to regression, and «w» is the relative weighting which is indexed by «I».

Using weights of 0 and 1 makes it possible to ignore certain points. However, to ignore points where a basis term or the «Y» value might be NaN, you need to test for w:

To overlay the regressed curves on the original data, a good method is to continue using a scatter plot for both data and curves. Create a variable as a list of identifiers -- the first identifier being the original «Y»-value data, the second identifier being the fit-«Y» value (i.e., Sum(Basis*X, K)). Then plot the result as an XY plot, using your X value variable as an XY Comparison Source. The model RegressionCompare.ana demonstrates this, with the plot shown here: 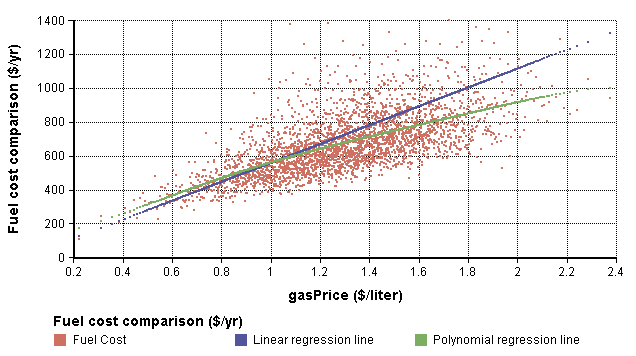 Adding more basis terms to your regression model will improve the fit on your training data, but you may reach a point where the extra terms decreases the quality of predictions on new data. This phenomena is referred to as over-fitting. As a general rule, as the number of data points increases, the more basis terms you can have before overfitting becomes a problem.

One approach that is often employed to evaluate whether the improvement justifies the additional basis terms is to use an F-Test. The output of this test is a p-value, which gives the probability that the improvement obtained is just due to sample noise under the assumption that the extra basis terms do not actually contribute any additional information. A small p-value means that there is statistically significant support that the extra basis terms improves the goodness of fit. One standard is to accept a model with more basis terms when the p-value is less than 5%.

To compute the F-test p-value, we'll use these variables:

Then the regression coefficients for each model are:

The forecasted values from each model are:

And the sum-of-square residuals are:

The F-statistic is given by†:

And the p-value is†

When a Null appears in «Y», the corresponding point is ignored.

When a Null appears in «B», the corresponding basis term along «K» is not used. The coefficient for that basis term in the final result is Null.

† Various expressions that appear on this page for the Secondary statistics use IndexLength(I) or IndexLength(K), which give the number of data points and number of basis terms respectively. For example, these appear in the expressions for Fstat, pValue, S and chi2. However, when Nulls are present, this reduces the effective number of data point or basis terms, so if you have Nulls in «y» of «b», you should substitute these

Starting in Analytica 5.0, if every term in «B» for a given point is Null, then the point is not used, and this does not cause any basis terms to be removed from consideration. However, if any non-null appears for that point in «B», then the terms where the Null values appear are removed from the basis.