Importance weighting is a powerful enhancement to Monte Carlo and Latin hypercube simulation that lets you get more useful information from fewer samples. It is especially valuable for risky situations with a small probability of an extremely good or bad outcome. By default, all simulation samples are equally likely. With importance weighting, you increase the number of samples in these areas of special interest (good or bad) by a factor f. You assign inverse weights 1/f to these sample points in SampleWeighting so that the resulting probability distribution is the same. Thus, you can get more detail where it matters and less where it matters less. Uncertainty views and statistical functions use SampleWeighting to reweight the samples so that the results are unbiased.

You can also modify SampleWeighting interactively to reflect different input distributions and so rapidly see the effects on results without having to rerun the simulation. By default, it uses equal weights, so you don’t have to worry about importance sampling unless you want to use it.

SampleWeighting: To set up importance weighting, you set weights to each sample point in the built-in variable SampleWeighting. Here is how to open its Object window: 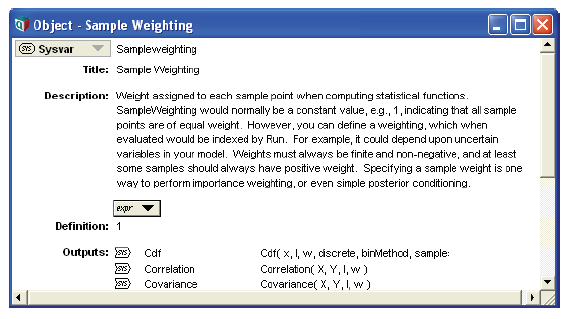 Initially, its definition is 1, meaning it has an equal weight of 1 for every sample. (1 is equivalent to an array of 1s, e.g., Array(Run, 1)). For importance weighting, you assign a different weighting array indexed by Run. It automatically normalizes the weighting to sum to one, so you need only supply relative weights.

Suppose you have a distribution on variable «X», with density function f(x), which has a small critical region in cr(x) — in which «x» causes a large loss or gain. To generate the distribution on «x», we use a mixture of f(x) and cr(x) with probability «p» for cr(x) and (1 - p) for f(x). Then use the SampleWeighting function to adjust the results back to what they should be is:

For example, suppose you are selecting the design Capacity in Megawatts for an electrical power generation system for a critical facility to meet an uncertain Demand with a lognormal distribution:

According to this simulation, the probability of demand exceeding capacity is 1.5%. Suppose the operator receives Price of 20 dollars per Megawatt-hour delivered, but must pay Penalty of $200/megawatt-hour of demand that it fails to supply:

The estimated mean revenue of $2309 is imprecise because there is only a small (1.5%) probability of a large penalty ($200/Mwh that it cannot supply), and only a few sample points will be in this region. You can get a more accurate estimate by using importance sampling to increase the number of samples in the critical region, where Demand > Capacity):

Since we have increased the probability of sample points with demand exceeding supply, we need to adjust their weights inversely by dividing by the mixture density:

Thus, we compute a Weighted_demand as a mixture between the original distribution on Demand and the distribution in the critical region, Excess_demand. We assign weights to SampleWeighting, using the Object window for SampleWeighting opened as described above. In the above, Density(Demand) is a placeholder for the actual target density function for your demand, and Density(Excess_demand) a placeholder for the truncated density.