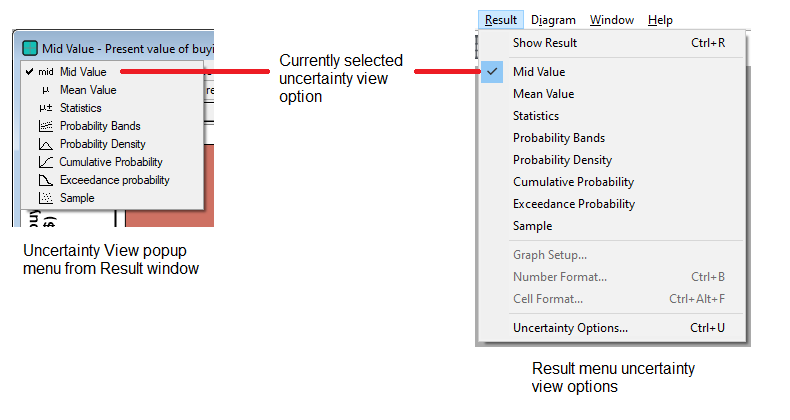 Here we illustrate each uncertainty view using the chance variable, Rate_of_inflation, defined as a normal distribution with a mean of 2.5 and a standard deviation of 1:

The mid value is the deterministic value, computed by using the median instead of any input probability distribution. It is computed very quickly compared to uncertain values. It is the only option available for a variable that is not probabilistic. 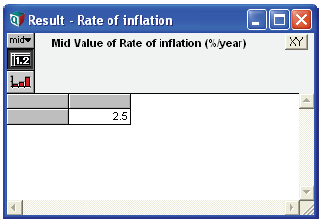 Tip
A mid value is much faster to compute than a prob(abilistic) value, since it doesn’t use Monte Carlo simulation to compute a probabilistic sample. It is often useful to look first at the mid value of a variable as a quick sanity check. Then you might select an uncertainty view, which causes its prob value to be computed if it has not already been cached.

An estimate of the mean (or expected value) of the uncertain value, based on the random (Monte Carlo) sample. 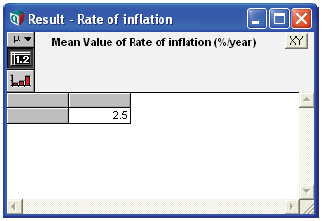 A table of statistics of the uncertain value, usually, the minimum, median, mean, maximum, and standard deviation, estimated from the random sample. You can select which statistics to show in the Statistics tab of the Uncertainty Setup dialog from the Result menu. 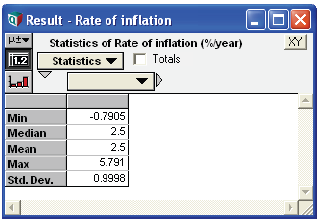 Probability bands: An array of percentiles (fractiles) estimated from the random sample, by default the 5%, 25%, 50%, 75%, and 95%iles. You can select which percentiles to show in the Probability Bands tab of the Uncertainty Setup dialog from the Result menu. 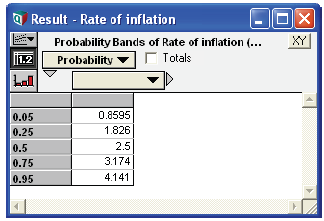 Usually, it figures out whether to use a probability density or mass function. Very rarely, you might need to tell it the domain is discrete. See The domain attribute and discrete variables Is the quantity discrete or continuous?, and Probability density and mass graphs for more. 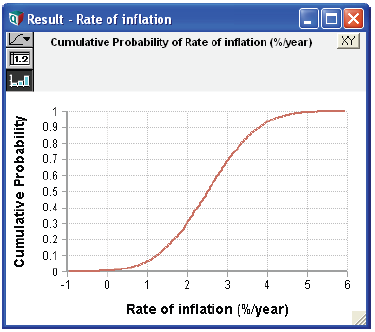 The steeper the curve, the more likely the quantity will have a value in that region. The PDF is the slope (first derivative) of the CDF. Conversely, the CDF is the cumulative integral of the PDF.

The steeper the curve, the more likely the quantity will have a value in that region. The PDF is the inverse slope (first derivative) of the XPD. . 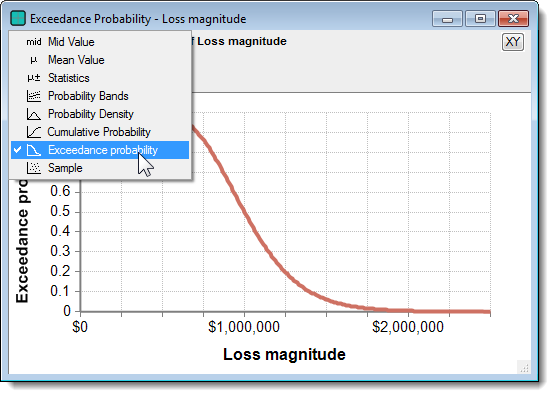 A sample is an array of the random values from the distribution generated by the Monte Carlo sampling process. The sample is the underlying form used to represent each uncertain quantity. All the other uncertainty views use statistics estimated from the sample. The sample view gives more detail than you usually want. You will likely want to view it mainly when verifying or debugging a model. 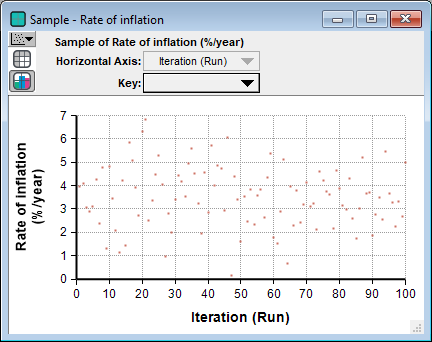 Like any other graph, you can display a sample as a table by clicking

to see the underlying numerical values. 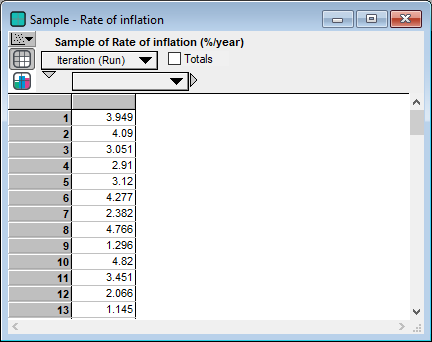