Flat data files are usually read using ReadTextFile. When you read text files, end-of-line characters are interpreted in various ways for you, conversions from character sets such as UTF-8 or Unicode may occur, and certain special byte values such as the zero byte or end-of-file cannot occur in the file. In contrast, reading from a binary file gives you access to the bytes of the file exactly as they appear.

ReadBinaryFile is most commonly used when you have a data file in a binary data format from another application, and need to access the internal bytes at particular locations. It can also be used in conjunction with WriteBinaryFile as a fast and convenient method to dump an Analytica array to a file and load it back in later.

The function GetFromBinaryData operates identically to ReadBinaryFile, except that it reads from an in-memory binary data term rather than from a file. If you plan to run your model runs in ACP over the web, it is important to read the file into memory with one call, and then use GetFromBinaryData to read each item so that the user is asked to upload the file only once.

returns the contents of the file as bytes, a list of integer values between 0 and 255.

To limit the number of items read, pass an index to the «resultIndex» parameter having a length equal to the maximum number of items to read. The actual number read will be less if the end-of-file is reached. For example,

Name of file to read from.

File name paths can be either relative or absolute. An absolute path specifies the full path of the file from a root drive, such as

A relative filename incompletely specifies a file path, and is interpreted relative to the CurrentDataDirectory.

The index(es) that you want as index(es) of the result. If you provide no index, it returns an unindexed list, so the variable calling ReadBinaryFile will appear as the index. If you provide multiple indexes, the last index listed vary fastest and first varies slowest as items are read.

If the indexes are in a different order in the file from the canonical order within Analytica, it reforms (transposes) the array to the internal form needed. If the amount of data is very large file (e.g. file has hundreds of MB), this reform process can be quite time-consuming.

Specifies the number of bytes per item read. For example, when you specify bytesPer: 4, then each 4 bytes becomes one cell of the result. When this is 1, then each byte is read and returned as a separate cell. Using 8 for «bytesPer» will result in the most memory-efficient encoding of contents when it is read into memory, since there is 8 times as much information per cell as would be the case for single bytes (and the bytes required per cell in memory would be the same in both cases).

When reading integer values (as is the default when «typeFlags» is omitted), this specifies the number of bytes per integer word, and can be 1 (for single bytes), 2 (for 16-bit words), 4 (for 32-bit integers) or 8 (for 64-bit integers).

For the «typeFlags» option of 3, nine bytes per item are used, so you can either omit «bytesPer» or set it to 9. Any other value throws an error.

For the «typeFlags» option of 4, the number of bytes per item may vary (depending on the length of text values), and so «bytesPer» must be omitted or an error will be issued.

Controls how each item read gets converted into a value.

You can say the one-byte integer with hex value 0xc1 is equal to 193, or you can say that it equals -133. The distinction here is whether you interpret the raw binary data as representing an unsigned integer (193) or a signed integer (-133). Signed integers use two's-complement so that both negative and positive values are within the possible range. Use typeFlags: 0 when you want integers to be interpreted as unsigned, or 1 to include negative values. When «bytesPer» is 8, integers are read in as signed regardless.

You can add the 32 "big endian" option to the data type selection. So, for example, a value of 2 + 32 would specify a floating point format (2) with the byte order reversed (32).

The Value type is a variant data type, in which a leading byte encodes the internal data type of the value, and followed by an 8-byte value. The «typeFlags» option of 3 only writes Analytica data types that can be fully encoded in with 8 bytes, which includes integers, fixed-point reals, floating point reals, date and date-time numbers, and the special value Null. When using this type, Null values ARE written to the file. The «typeFlags» option of 3 cannot be used to write text values, since these vary in length. The cells will each use 9 bytes, and will be spaced every 9 bytes in the file.

The «typeFlags» option of 4 extends option 3 by allowing text valuesor binary data. When a text value occurs, the first byte indicates that the value is text, the next four bytes encode the length, n, and the next n bytes encodes the characters in UTF-8. When a binary data "blob" occurs, the first byte indicates the value in binary, the next 8 bytes specify the number of bytes, and then the next n bytes are the data. When this format is used, the «bytesPer» parameter must be omitted. The location of items in the file are not spaced at any predictable interval, since text items vary in length.

The «typeFlags» option of 7 reads the next «bytesPer» bytes of the file into memory as a binary data term. When «bytesPer» is INF or omitted, the entire file is read. When «bytesPer» is specified and you haven't specified an index, it'll read a list of binary data terms of the given size. If you have specified and index, it'll read up to the index length binary data chunks. You can use this to read a binary file into memory, and then use GetFromBinaryData to perform multiple reads at different locations. This avoids extra overhead of opening and closing the file during each read. GetFromBinaryData has the same parameters as ReadBinaryFile, but reads from an in-memory binary term rather than from a binary file on disk.

When «offset» varies with the result index(es), you can use Null values in the «offset» array to indicate that the item resides directly after the previously read item. Hence, set to non-null integer values only for those items that start at a new offset.

The text to use as caption of file selector dialog.

WriteBinaryFile() and ReadBinaryFile() are the fastest ways to write data from a model to a file or read from a file, because the numeric data does not need to be converted to text when writing or parsed when reading.

Assume: a is an array indexed by indexes I, J, K, and l. Assume also that it contains only numbers, dates and null values -- no text, handles, references, etc.

Write the array to the file:

Read the array back in: 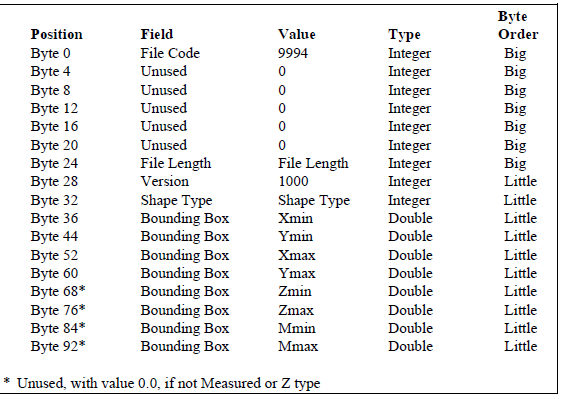 To read this, create an index for the items of the header:

The bytes per item varies:

The full header is then read using:

The following model embellishes this with a user-interface for selecting the items in a general binary data record and using this to read the structure. For complex binary structures, this may simplify the coding. 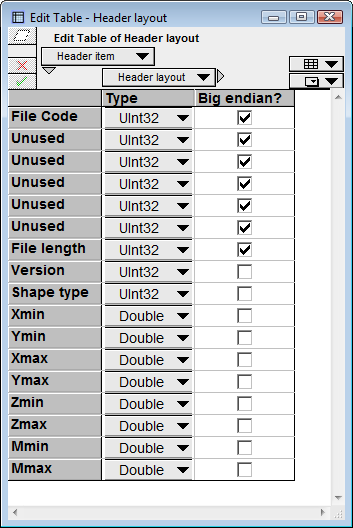 By specifying a blank filename, or a filename that you know does not exist on the server, ACP will display a file selector dialog on the user's browser, asking her to select a file for upload.

This can be utilized to upload an arbitrary file type to disk, since you can use this to upload the file into memory (by setting «typeFlags» to 7), and then using WriteBinaryFile to save it to the server's disk (again, setting «typeFlags» to 7). This trick can be utilized to upload a spreadsheet when using LibXL for reading spreadsheet data where Excel is not installed on the server, as is the case on Lumina's public ACP server. For security reasons, Excel is not installed on Lumina's public ACP server.

When evaluated in the Analytica Decision Engine (ADE) and a dialog needs to be shown to the end-user, it calls IAdeUICallbacks::GetFilename(...). From within that callback, the parent application can interact with the end-user to resolve the file path, and a web applications can instruct the end-user to upload a file. Once complete, the callback returns the full path to the file which is then read. To receive this callback, the parent application must have previously registered the callback with ADE using CAEngine::SetCallbackObject( ).

Once the file read completes, it calls IAdeUICallbacks::FileOpenCompleted().