Analytica provides a flexible way to show an array with one or many dimensions in a graph or chart by assigning values or indexes to graph graphing roles. In the simplest case of a 1-D array, you typically use only two graphing roles: The array's single index appears on the Horizontal Axis role, and the values use the Vertical Axis role. For example, here are the boiling points of the chemical elements, indexed by Symbol: 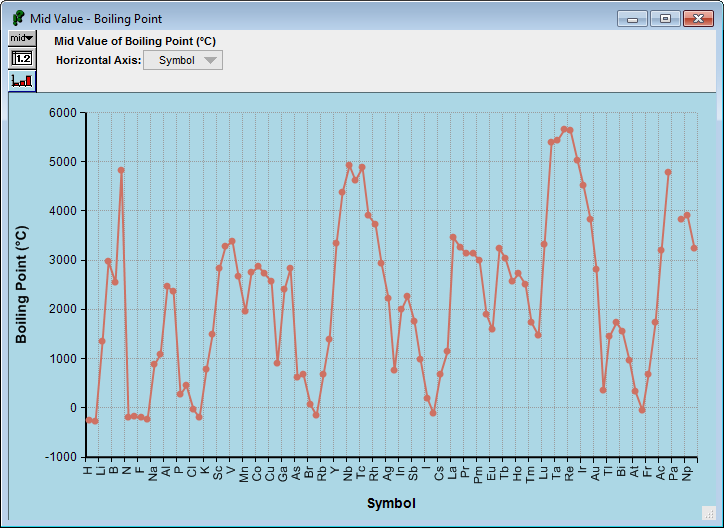 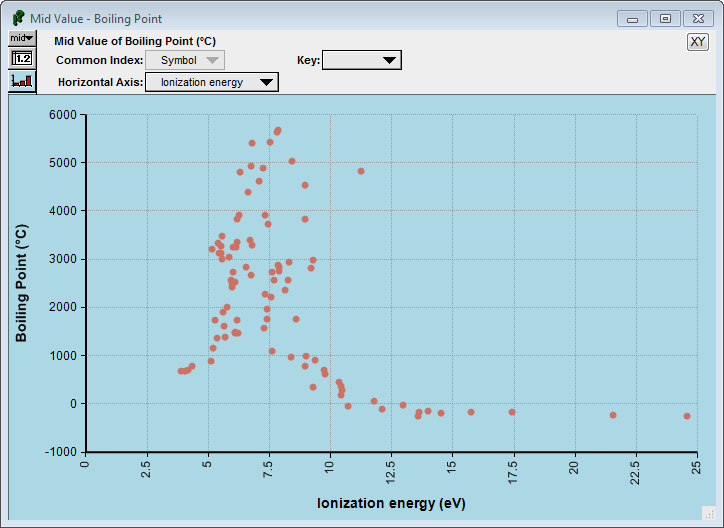 A graph that uses a value (rather than an index) as the horizontal axis is often referred to as a parametric plot or an XY-plot. In the header area of the result window, above the graph, several of the graphing roles appear with pulldowns that enable you to change which value or index is assigned to the graphing role. In the preceding case, a meaningful plot results because both boiling point and ionization energy share a common index, Symbol, and that index is used for the Common index role. The Horizontal Axis role also appears, but the Vertical Axis role in this case does not explicitly appear. Although it does not show, the Vertical axis role is present and is filled by Boiling point, which happens to be the only valid option for that role here, and hence a selector for the role is not shown. A Key role appears but is currently not assigned to any index or value, and hence, the graph is not showing a key. The next plot assigns the variable Classification to the Key role. 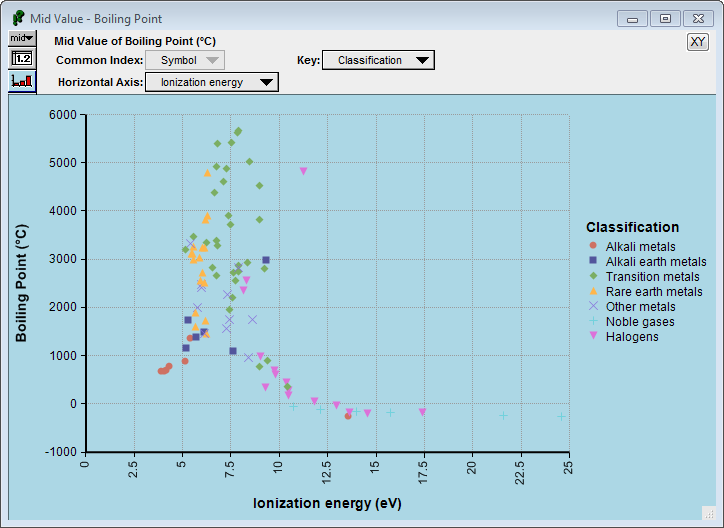 Here Classification is another comparison variable, whose result is an array indexed by Symbol, and for each symbol it contains the textual classification for that element. The graph is now depicting several pieces of information: The boiling point, the ionization energy, and the classification, as these vary along Symbol. In addition, the Symbol of the element is in there as well, viewed when you click on a point. 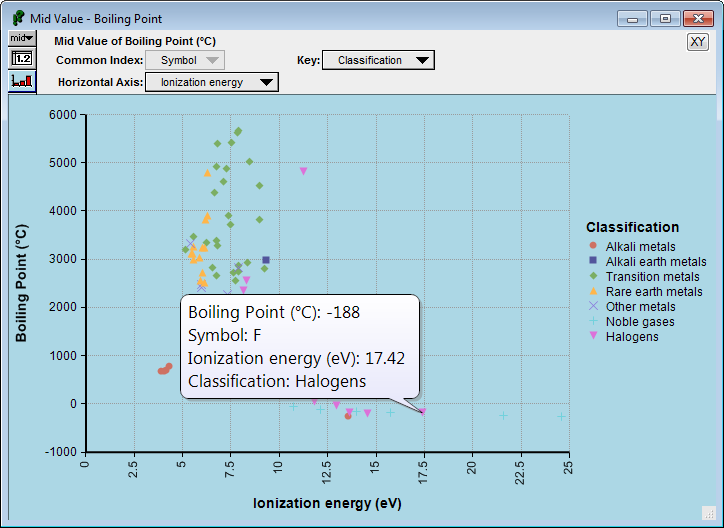 In the examples so far, the variable's value (Boiling point) used the Vertical Axis role, but you could also assign it to the Symbol size role. Then you can assign a yet another comparison variable (Periodic table row) to the Vertical axis role: 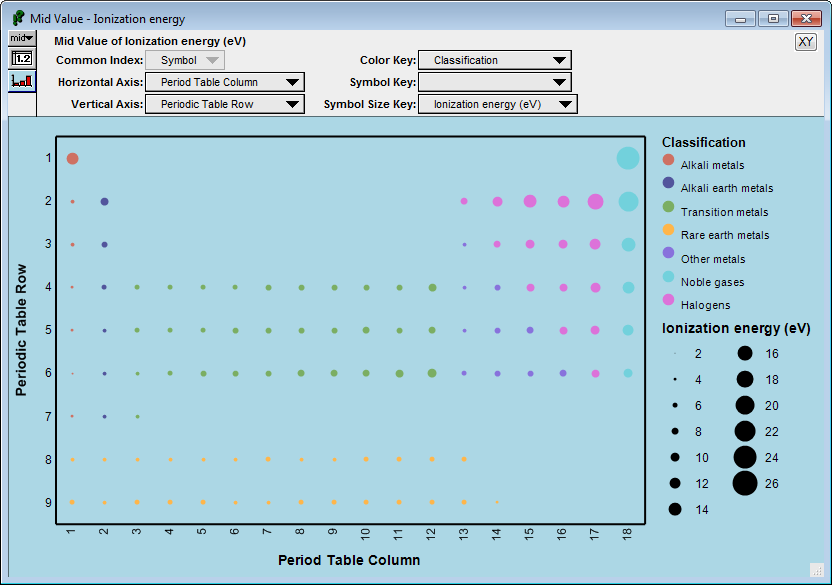 Graphing roles let you produce a variety of "chart types" just by assigning values or indexes to graphing roles, rather than selecting from a library of chart types. When designing a graph, it helps to think about which graphing role you want to use for each kind of information, values and indexes.

When you want depict an exogenous value in your graph, you must first add it as a comparison variable. Do to this, push the

To assign individual slices to graphing roles, first turn on the comparison index by pressing the 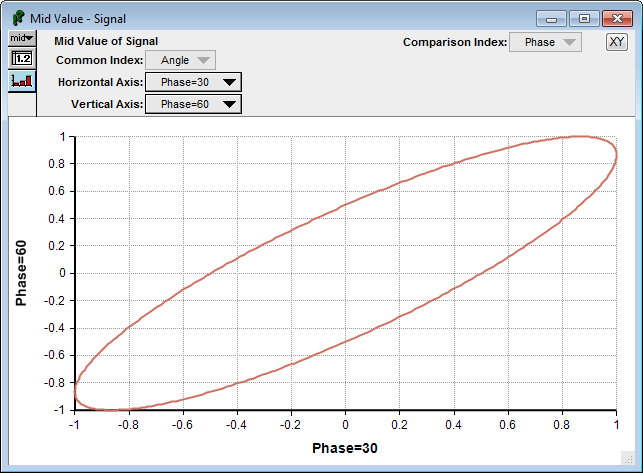 The Comparison index pulldown excludes indexes that have more that 50 elements, as these are deemed unlikely to be comparison indexes (they are almost certainly long data indexes). Also, when viewing the CDF or PDF result view for a continuous distribution, the Comparison index is always implicitly set to be the DensityIndex and cannot be changed from that result view.

Some graphing roles only appear after they have been enabled from the Graph setup dialog. For example, by default only a single Key option appears for symbol or symbol/line plots, but by enabling the Use separate color / symbol keys and Allow variable symbol size settings (on the Chart Type tab of the Graph setup dialog), you'll have the option of assigning separate indexes and values to the Color, Symbol and Symbol Size roles, enabling you to depict as many as six separate items on a single symbol or symbol-line plot. In a line plot with multiple varying indexes, the Common index role specifies the index that varies along a single curve, thus determining how the points are connected.

In a bar chart, roles may include the two axes, Color, Bar origin, Stacking index, and Cluster index. In a bar chart, the independent axis (the horizontal axis unless Swap horizontal and vertical is enabled) must be an index or a categorical value (i.e., not a continuous or real-valued quantity). When a categorical value is used, it is possible that multiple bars may land in a single horizontal label, and that the number of bars by be different in each horizontal label, which is allowed. Cluster index appears as a role separate from Color when a categorical value is assigned to the Color role in a stacked bar chart and varies along at least two indexes. The Bar origin role is available only after you've enabled the Variable origin setting in Graph setup.

The Color role must also be either an index or a categorical value an not a real-valued quantity. Several roles are restricted to index fillers: Common index, Stacking index, Cluster index and Symbol.

When a categorical value having two or more indexes is used for the Color role, and the Stacked setting is enabled, the Stacking index and Cluster index roles both appear.

Any index appearing as a slicer can be set «All» to make it a free index, so that all data that varies along that index appears on the plot. This enables any number of indexes to vary, and hence, many more data points to appear. If your filler for the Color role does not vary along the slicer index, then you will have multiple lines, bars or symbols with the same color, and the same holds for other roles that don't vary.

Many role-filler combinations would not produce meaningful graphs. For example, you would not want to vary Color along the Common index in a line chart, which would cause a single curve to vary its color from point to point, and make it difficult to identify that curve in the key. The result window role pivoters employ many intelligent heuristics to expose only the roles and role filler options that would result in meaningful graphs, and to adjust other roles after you make a selection so that the combination of role assignments is sensible. This often enables you to reach the desired graph quickly without having to pass through nonsense intermediate pivots.

In a bar chart, it would be redundant to use the same index for the Horizontal Axis and the Color, but this is not a disallowed combination. 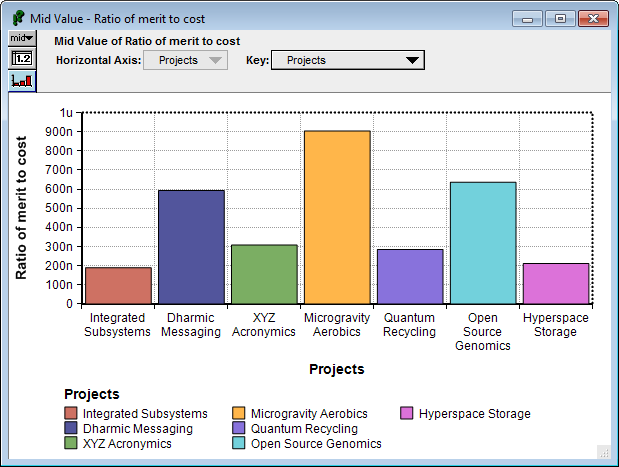 However, as you attempt to set Horizontal Axis and Color to be the same index, you may find that automatically changes Color to be different from Horizontal each time you change Horizontal, and vise versa, repeatedly "outsmarting" you in its attempt to produce the more meaningful graph. The "trick" here is to first assign it to Horizontal and set Color to blank, and then change color to the same index.

This example shows projections of U.S. energy consumption made by two organizations, the U.S. Energy Information Administration (actual) and the Alliance for Renewable Energy (fictional). The horizontal axis is set to Energy source, the key color is set to Organization, leaving the Year as a slicer, from which we have selected 2025. 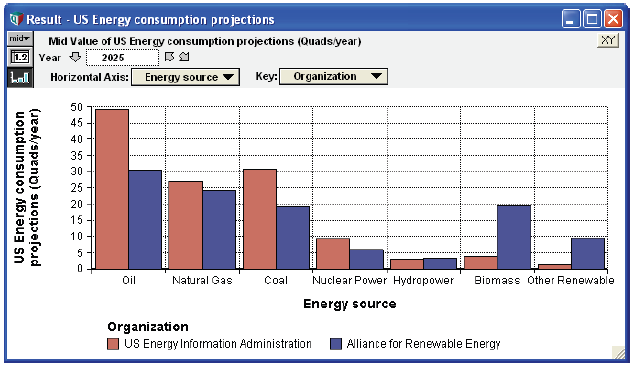 Here we have pivoted the graph by changing graphing roles. We assign Year to the horizontal axis, Energy source to the color key, and Organization to the symbol key, leaving no need for a slicer. 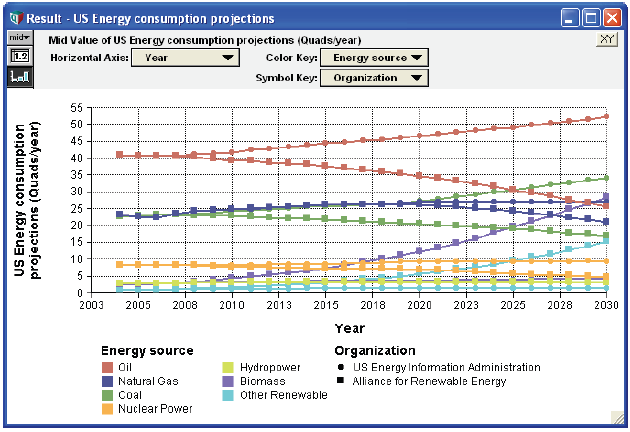 In this version, the color key and symbol key both show the Organization index, which is therefore differentiated by both color and symbol shape. The index Energy source is not assigned a visible graphing role, so shows up as a slicer. It is set to Totals, to show total over energy sources for each organization. 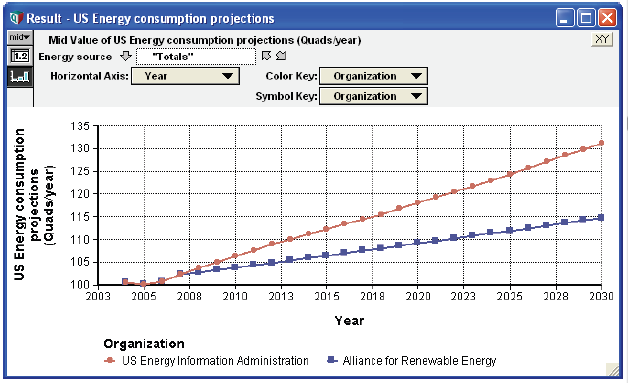 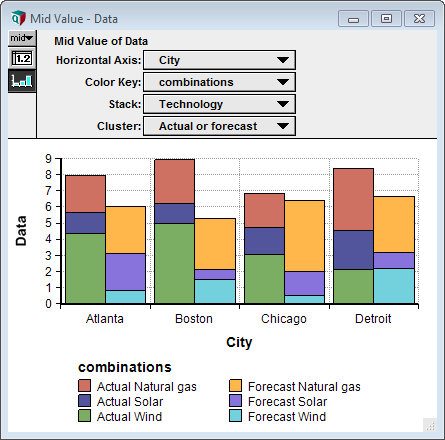