A formatted text literal (F-string for short) is a concise way to define text containing expressions, such as the values of variables.

A formatted text literal (F-string for short) starts with F or f preceding a text literal enclosed in double-quotes. It can include replacement expressions delineated by curly braces, which get replaced by the result of evaluating the expressions -- for example, if x=1 and y=2:

You could get the same result using text-concatenation as

but the F-string version is more concise and easier to read.

A formatted text literal starts with either F" or f", and ends with ". In other words, it is a double-quoted text value prefixed with an upper or lower case F. There can be no space between the F and the opening quote. You can insert expressions within the text using curly braces, {expr}. When it evaluates an F-String, it also evaluates any expressions in curly braces and substitutes in their results.

There is currently no single-quoted version of F-strings in Analytica, so you cannot write f'Something'. It must use double quotes is in f"Something".

To embed a double quote ("), or curly brace ({ or }) in the text part of an F-string, you must double the character. For example,

which has the content: An F-string has the form F"some text { an expression : format spec } some more text".

When the curly braces are not doubled, the content between them is parsed as an expression. Optionally, the expression can be followed by a colon (:) and a format specifier. For example:

When a curly-bracket expression evaluates to an array, it creates a text value for each cell. When you have more than one expression, the indexes of your final result will be the union of the indexes for all the expressions. For example:

You don't need a format specifier when you've set the Number Format of your variable or UDF to be as you'd like. Also, you have the option of using NumberToText around your expression for a more descriptive way to specify the format.

A format specifier can specify the following information:

All three are optional, or you may specify more than one.

Parts that aren't explicitly specified are inherited from the current variable or UDF's number format.

A number format type can be one of the following characters:

The following characters specify additional components of the number format:

A few options not available (if you need these, use NumberToText) are: Currency symbols, use of parentheses for negative numbers, control of the ordering of currency, sign and digits. 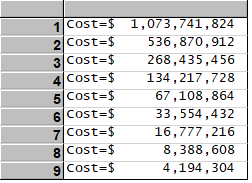 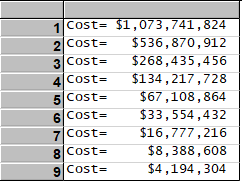 The last example shows how you can use a nested F-string to produce a fixed-width cost column while keeping the $ attached to the number.

The date template renders date-time values. This can be specified along with a number format, so that when an expression returns an array of values with some dates and some numbers, the number format is used for numbers and the date format for dates.